Zune the new music player released by Microsoft has seen a slump in it’s sales according to numbers released. The LaTimes reports:

November 29, 2006
Microsoft Corp. said initial sales of its Zune music player were in line with the company’s expectations amid reports of waning interest in the device that competes with Apple Computer Inc.’s iPod.Initial sales “indicate we are on track to meet our internal business projections,” Zune Director Jason Reindorp said.Redmond, Wash.-based Microsoft has refused to disclose sales or projections. A survey by Piper Jaffray & Cos. analyst Eugene Munster shows that few retailers are recommending the device.Zune went on sale Nov. 14 and since then its rank among Amazon.com’s top-selling MP3 players has declined to 18th from a high of seventh for its most popular black model, Munster said. It ranks even lower for other models, he said.

An interestign piece of news is that many sites are reporting that the Zune is in fact a re-badged Toshiba Gigabeat. Take a look at them below and tell me what you think and since the Gigabeat can be found for at least a $100 less then the Zune then it is easy to see why Zune sales may be slipping already. 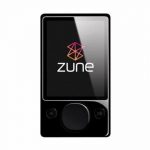