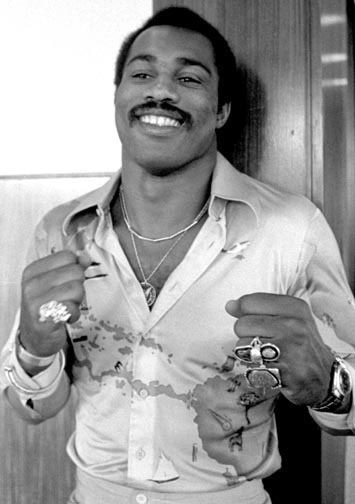 Kenneth Howard Norton Sr. (August 9, 1943 – September 18, 2013) was an American heavyweight boxer and WBC world Heavyweight Champion. He was best known for his 12-round victory over Muhammad Ali, when he famously broke Ali’s jaw, on March 31, 1973, becoming only the second man to defeat a peak Ali as a professional (after Joe Frazier, who won a 15-round unanimous decision against Ali on March 8, 1971).
He and Ali would fight twice more, with Ali officially winning narrowly both return bouts, although many felt Norton truly deserved their third fight. Norton was awarded the WBC title (by virtue of his win over Jimmy Young in a 1977 title elimination bout) when Leon Spinks declined a mandated title defense against Norton, the number one contender. However, Norton lost it in his first defense on a split decision by 1 point to Larry Holmes in a great contest (Holmes-Norton is ranked as the 10th-greatest heavyweight fight of all time by Monte D. Cox, a member of the International Boxing Research Organization).